Of course, as an incredibly popular tourist destination, Prague has both its good sides and its bad: the architectural wonders that exude its special atmosphere versus the tourist trap aspects that throw some shade on the city’s charm and legacy. With so much to see and do in the Czech Republic’s capital, it is my intention to suggest what you can see and do in just three days – so here goes!

You can see Prague’s most important sights on foot, but put on your most comfortable footwear for a serious jaunt around town.

You can’t really get lost in Prague, because all you need to do is drift along with the masses. Still, it’s not a bad idea to have a well-planned itinerary for this stunning city, so that you’re not simply wandering aimlessly on your quick trip. Who wants to hear about what you missed, or what others experienced that you’ve left out of your visit? Not you, right? Admittedly, I’m not going to tell you anything here that you haven’t read a million times before about Prague. But, hopefully, I’ll give you a taste of the city’s mood in the hopes that it will inspire your trip to the capital of the Czech Republic.

Day 1 – On the right bank of the Vltava: Old Town, New Town, Josefov

It is worth visiting the Old Town (Staré Město) to start your tour of Prague.

What is there to do in Old Town Square? Go see Prague’s emblematic Orloj (astronomical clock), which sits high atop the tower of the Town Hall square, for a quick “puppet show” on the hour. Let the magnificent Gothic Towers of the Tyn Church impress you, or the beauty of the Baroque St. Nicholas Church and the surrounding palaces. Lose yourself on narrow, cobbled streets. Visit the Mucha, Warhol, and Dalí exhibitions in the art gallery located on the square, orgrab a seat on its perimeter for a coffee or “rezané” (a half light, half dark beer that’s a Czech favorite) and observe an array of street performers – the crowd gathered around them might be even more entertaining!

In many cases, it is a great value to purchase a combined ticket for many of the city’s attractions.

Meanwhile, the Powder Tower marks one of the ancient borders of Prague Castle. The name of the entrance to the town was very logically derived from the fact that in the 17th century it stored gunpowder. It’s not worth queuing to climb the tower for the view, as there are many more suitable places to do that in Praha.

Josefov: a trip to the Jewish quarter

Continue your stroll around the Old Town to the district of Josefov, which has been home to Prague’s Jewish population since the 10th century, and was the first walled ghetto. Wish for something, write it down on a note and hide your message on the gravestone of Rabbi Löw, who will fulfill your wish.

The curious tattered glory of the old Jewish cemetery is due to its limited space: over 100,000 have been buried there in stratified layers. The visible headstones, however, only reveal a fragment of that number.

Wenceslas Square, the scene of all turmoil in Prague

This iconic square has been a traditional gathering place for the Czechs during demonstrations and on holidays. During the Prague Spring of 1968, two students burned themselves on Wenceslas Square in protest of the defeat of the Revolution. Twenty-nine other people across the land followed this bizarre method of protest and none survived their burns.

Wenceslas Square is home to the National Museum, but you can also go there to admire the Art Nouveau façade of the Grand Hotel Evropa.

Call it masochistic, but it is entirely worth getting up at the crack of dawn to catch the Charles Bridge which connects the Old Town to Mala Strana, the “little side.” At this quieter time on the bridge, you will not have to push your way through the masses to touch the relief on the statue of St. John Nepomuk (for luck).

The foundation stone (laid by Charles IV himself) of the bridge is dated 1357. 9. 7. 5:31 – which reads the same way from front to back as it does back to front. Charles IV was superstitious enough to consult his astrologers who suggested this date as an auspicious time to start the construction saying it would give the bridge the strength to sustain itself over time. Well, it has worked!

Bask in the minute details of Mala Strana, such as the special symbols painted above the doorways on the facades of buildings which once functioned as street address signs and indicated the skill or craft of the occupants of the house and their preferences. You can see great examples of this on Neruda Street.

From the Charles Bridge on the Mala Strana side, a staircase on the left-hand side leads to “Prague’s Venice,” the very lovable Kampa Park, whose nickname derives from the canals crossing the park and the houses built on them.

The tranquility of this little green island is only disturbed by the sculptures of David Cerny and the John Lennon wall, which were symbols of freedom in the 1980s under Czechoslovakia’s communist regime.

Hradčany is the largest, uniform castle district in the world, with the Saint-Vitus church located at its heart. I cherish this proud, Gothic miracle. Over the years, the church has been wedged between buildings, ensuring a stiff neck when gaping up at it – and it is impossible to take a photo of the building in its entirety (but it is worth the effort). It’s a good idea to linger upon the details of the gargoyles that look like they’re jumping out at you, the rose-colored windows depicting creations, or the stained glass designed by Mucha– and then head up to the tower for the unparalleled view.

Within the vicinity of St. Vitus, the prospect of actually seeing the small, charming “Golden Street” is a difficult one, but give it a try. It’s definitely worth checking out, just be aware of the fact that the mass of tourists crammed into these quaint, shrunken houses is sure to shrink your enthusiasm.

On Hradčany Square, you can watch the changing of the guard at noon, and admire the imposing palaces. Baroque lovers should definitely see the Loreto-Virgin Mary church, which is a bit further away.

If you’ve made it this far, the real Prague is coming, and you will find yourself so in love with it that you’ll want to come back, again and again.

Novy Svet is part of Prague’s Castle District, so you don’t have to travel long distances to find it: it’s only a few streets away from Hradčany. Considering its charm, I have never fully understood why it remained less frequented by tourists compared to other sights, but it seems to be holding on to its quiet, small town atmosphere. This tiny gem of Prague with its winding cobblestone ways and lovely coffee houses reveals a different face of the city, which you can’t help but fall in love with.

The Petrin Lookout is worth visiting but not so much for the well-known lookout tower and the undeniably beautiful view from it. You can take a cable car up to it, but I would recommend taking some time for the hike upward. Thelast time I was there, I was with my best friend and we had so much fun on this walk, talking and laughing our way up, crying out loud sometimes at the amazing view, and occasionally encountering some local dog walkers. I dare say that this place has a special atmosphere, that’s why locals love it so much, too. The walk is not strenuous and there is a restaurant half the way up to take a coffee or beer break.

When the weather allows for outdoor places to be open, Letna Park is my absolute favorite place to visit. Without a doubt, the most frequented place within the park is a very cozy beer garden with a wonderful view that overlooks the city. Take the tram to get there, as it is bit further away from the hustle and bustle of the city – but it is a must if you’re craving some real Czech atmosphere. Beer comes in plastic cups, food on paper plates, but hell, it somehow feels just perfect to sit on a wooden bench and consume it under the shade of the park’s beautiful trees while watching locals have fun – and of course the view is fabulous. If you are done with your beer, take a stroll in the park and don’t forget to visit the metronome where the world’s largest statue of Stalin once stood. It is a good place to sip another beer and watch the sun descend beyond the towers of Prague.

My name is Erika, and I am from Budapest, Hungary.

While I have a full-time job as a brand strategist, I am happiest when on the road, at the ready with camera in hand. Travelling and photographing this beautiful world is not only a hobby for me but also a way of quenching my thirst for new cultures, languages and meeting locals. I love discovering roads less travelled and hidden gems, hence this website and the concept of Be My Guides were born.

Climb aboard and join me on my next adventure! 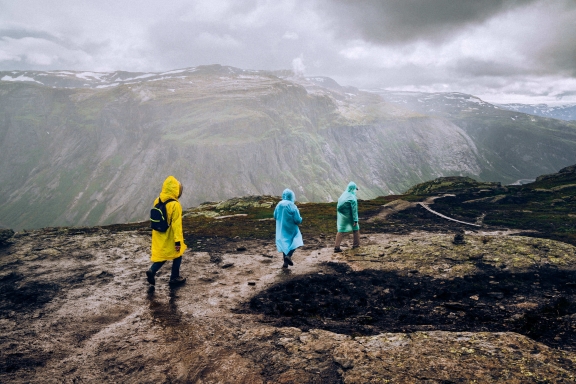 THE FRENCH CAFE STARS IN ALL PARIS TRIPS

IS TRAVELING OVERRATED? DOES TRAVEL MAKE US HAPPY?

GET YOUR PIECE OF MYKONOS GREECE

HERE’S WHERE TO GO FOR YOUR PARIS PHOTO